June 19, 2105:  After the defeat of part of the Fast Track bill last week, President Obama and the Republican leadership found a new way to push this unpopular power grab – by attaching it to an unrelated bill for police officers’ and firefights’ pensions.  Using this underhanded approach, they narrowly succeeded in passing Fast Track in the House.  (You can see how your Representative voted here)

But the fight is not over yet!  Since the House did not pass the Senate version of the bill, it has to go back to the Senate yet again.

Several of the Senators who voted yes on Fast Track initially only did so because: (1) the bill contained Trade Adjustment Assistance to help displaced workers; and (2) they received assurances that the House would not let the Export-Import Bank expire at the end of June.  But the TAA portion has been removed, and the House appears very unlikely to re-approve the Export-Import Bank, breaking both conditions.  Moreover, the House-passed version of Fast Track is even worse than the original bill, eliminating simple currency measures and other enforcement provisions.

So we still have a fighting chance to stop Fast Track. The vote could happen as early as Tuesday, though, so time is short.

Please help us protect our economy and our sovereignty!  Call both of your U.S. Senators today and urge them to vote NO on Fast Track.  Call the Capitol Switchboard at 202-224-3121 and use the sample message below.

If you prefer to send email, you can also look up who represents you and find a link to their website at http://www.senate.gov/general/contact_information/senators_cfm.cfm

Sample Message for Calls or Emails 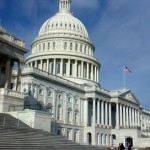 My name is ___ and I am a constituent. I am calling to urge you to oppose H.R. 2146, which includes the Trade Promotion Authority to fast track trade deals like the Trans-Pacific Partnership.  The Fast Track bill provides only vague, unenforceable guidelines, and fails to meaningfully limit the President’s power to negotiate broad trade agreements that will hurt our economy and undermine our sovereignty.  Please stand up for American workers and our constitutional protections, and vote NO on Fast Track.

Fast Track would allow dangerous trade agreements like the Trans Pacific Partnership (TPP) to be rushed through Congress, circumventing ordinary review, amendment and debate procedures.  It is a virtual rubber-stamp for trade deals that threaten our economy, our environment, and our sovereignty.

Like all past trade deals, the TPP would send American jobs overseas where it can be done more cheaply.  It’s even worse than previous agreements because it also includes a key provision that would allow foreign companies to sue the U.S. over laws that they claim would hurt their profits – like Buy Local preferences or labeling GMOs.  Federal, state and local laws could be struck down by international courts in the name of corporate profits!

With the Fast Track bill, Congress is being asked to green light a trade deal that the public hasn’t even been allowed to read and won’t be allowed to read until all the negotiations are already done.