Farmers have shared numerous studies about digestive and reproductive problems in livestock that is fed genetically engineered or modified (GM) grains. A group of Midwestern farmers collaborated with scientists from around the world to conduct a scientific study to see whether these stories were well-founded. Pigs, whose digestive tract is very similar to humans, were fed a diet of GM soy and corn for five months while a control group was fed non-GM soy and corn. This is the first independent long-term feeding trial of GM to livestock that we are aware of.

An overview is provided below, and the full study, “A long-term toxicology study on pigs fed a combined genetically modified (GM) soy and GM maize diet,” is available online on our website.

Special thanks to Dr. Judy Carman, the lead researcher; Howard Vlieger, one of the initiators of the study and a Board member of the Farm and Ranch Freedom Alliance; and all of the farmers and scientists involved.

For a rebuttal to some of the critics of the study click here.

At a commercial piggery in the U.S., we took 168 just-weaned pigs and fed them a typical diet for the piggery, containing soy and corn, for 22.7 weeks (over 5 months) until the pigs were slaughtered at their usual slaughter age. Half of the pigs were fed widely-used varieties of GM soy and GM corn (the GM-fed group) for this whole period, and the other half of the pigs were fed an equivalent non-GM diet (the control group). The GM diet contained three GM genes and therefore three GM proteins. One protein made the plant resistant to a herbicide, and two proteins were insecticides.

We chose a mixed diet instead of a single crop because this is usually what pigs and people eat. Regulators do not require animal feeding studies on mixtures of GM genes and their proteins, regardless of whether the genes are all “stacked” into the one plant or spread across several plants that are eaten in the same meal.

We chose pigs because they have a similar digestive system to humans, and because some of the investigators had been observing reproductive and digestive problems in pigs fed GM crops.

We took blood from the pigs a few days before they were slaughtered to do standard biochemistry tests. Autopsies were done by qualified veterinarians who didn’t know if a given pig was fed the GM diet or not, so their observations were completely unbiased.

Some of the investigators had previously seen a reduced ability to conceive and higher rates of miscarriage in piggeries where sows were fed a GM diet, and a reduction in the number of piglets born if boars were used for conception rather than artificial insemination. Artificial insemination guarantees the presence of a certain number of viable sperm. Because male pigs were neutered at 3 days of age in order to provide meat free of boar-taint, we were only able to look at the female reproductive system in these pigs. We found that, on average, the weight of the uterus of pigs fed the GM diet, as a proportion of the weight of the pig, was 25% higher than the control pigs. We found that this biologically significant finding was also statistically significant. We list some of the pathologies that could be occurring in these uteri in the paper.

Some of the investigators had also previously seen higher rates of intestinal problems in pigs fed a GM diet, including inflammation of the stomach and small intestine, stomach ulcers, a thinning of intestinal walls and an increase in haemorrhagic bowel disease, where a pig can rapidly “bleed-out” from their bowel and die. We weren’t able to look inside the intestines, due to the amount of food in them, but we were able to look inside the stomach. 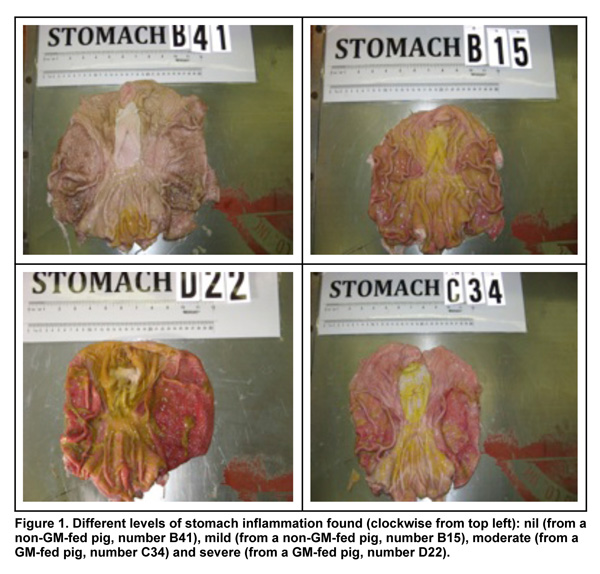