We have an exciting opportunity to expand access to locally produced meat for consumers around the country! U.S. Representatives Thomas Massie (R-KY) and Chellie Pingree (D-ME) have introduced legislation to make it easier for small farms and ranches to sell locally raised and processed meat to consumers.

H.R. 3187, the Processing Revival and Intrastate Meat Exemption (PRIME) Act, would give individual states the freedom to permit intra-state distribution of custom-slaughtered meat to individual consumers and to restaurants, hotels, and grocery stores that directly serve consumers. Custom-processed beef, pork, lamb, and goat are covered under the bill. 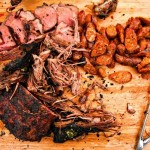 Under current federal law, farmers often have to haul their animals several hours away to reach a slaughterhouse that has an inspector on-site, even if they’re selling the meat directly to consumers at a local farmers market or similar venue. This increases expenses for the farmer, raises prices for consumers, creates stress on the animals, and undermines the concept of local food.

The farmer might have a “custom” slaughterhouse much closer – but, under the federal regulations, the meat from a custom facility can only go to the individual or individuals who owned the animal at the time the slaughter took place. This means that the customer(s) must buy the whole animal while it is still alive; for many farmers and consumers, this is not viable.

The PRIME Act would allow meat from custom slaughterhouses to be sold to consumers, subject to state law; each state would be able to set the requirements and limitations it thought appropriate.

While this is a major step forward for the local food movement, it’s not unprecedented by any means: until 1967, states were able to set their own regulations for meat processing. The consolidation of regulatory power at the federal level, combined with the consolidation of the livestock industry in the hands of a few massive corporate meatpackers, has led to the loss of thousands of small and medium-scale slaughterhouses since 1967.

Demand for locally produced beef outstrips production in the U.S., in part because of the lack of access to inspected slaughterhouses. The PRIME Act is the first step to rebuilding local processing infrastructure, which can revive rural economies and enable communities to become more self-sufficient in meat production.

Will you help move this important bill forward? Please contact your U.S. Representative and urge him or her to co-sponsor the PRIME Act!

We owe a big thank you to Representatives Massie and Pingree for filing this important bill. As of July 31, they have been joined by the following co-sponsors: Representatives Walter Jones (R-NC), Jared Polis (D-CO), Jared Huffman (D-CA), Justin Amash (R-MI), Scott Garrett (R-NJ), and John Garamendi (D-CA).

Call or email your U.S. Representative and urge him or her to co-sponsor H.R. 3187, the PRIME Act.

As a constituent, I urge Representative ____ to co-sponsor H.R. 3187, the PRIME Act. This important bill will make it easier for small farms and ranches to succeed financially and provide consumers with greater access to locally raised meats. The bill simply removes the federal ban on the sale of meat from custom slaughterhouses directly to consumers and venues serving consumers within a state, subject to state law. This returns power to the states to establish a regulatory scheme that makes sense for their citizens.