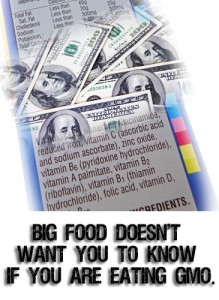 GMOs: Why the secrecy?

The new Congress is now in session, and it’s only a matter of time before what’s known as the Deny Americans the Right to Know (or DARK) Act is re-introduced. If passed and signed into law, this act would overturn state laws that require the labeling of genetically engineered (GMO) foods.

Big Food and the biotech companies like Monsanto are pushing to reintroduce the DARK Act, which would:
Prevent states from adopting their own GMO labeling laws.
Block any attempt by states to make it illegal for food companies to put a “natural” label on products that contain GMO ingredients.
Prevent the FDA from requiring companies to label GMO ingredients and instead continue a failed “voluntary” labeling policy.

Because FDA has not listened to the public call for GMO labeling (even ignoring the opinions of its own scientists), Americans have turned to the states for a solution. Last year, over 50 GE labeling bills were introduced in 26 states, including Hawaii, Oregon, Colorado, Washington, Indiana, and Missouri.

But the the industry-backed DARK Act will cut these state labeling bills off at the knees and replace them with an undemocratic, hollow “voluntary” labeling scheme that does nothing to address consumer interests and only serves to allow corporations to deny us our right to know.

Will you help us stop this industry attack?

Contact your U.S. Representative and urge him or her to oppose the DARK Act.

We know the industry groups are already talking with legislators to gain support for the bill before it is filed — so we need to take action now.

I want to know what is in the food I buy and feed my family. That is why I support mandatory labeling of genetically engineered foods.

Unfortunately, some Members of Congress want to keep me in the dark by preempting state labeling laws and preventing the FDA from ever requiring labeling. That is why I urge you to oppose the “DARK Act,” an industry-backed bill to block GMO labeling that was introduced last year by Representatives Mike Pompeo and G.K. Butterfield