Citizens Lobbying Day Relies on Strength in Numbers of People

AUSTIN, Texas – March 12, 2013 – On Tuesday, March 19, people from all over Texas will gather at the Capitol in support of local farms and food on Local Foods Citizens Lobbying Day, organized by the Farm and Ranch Freedom Alliance (FARFA). {Click here for details on how to participate.}

The day will begin with a training session on citizen lobbying and how to meet with legislators. Lobbying is often perceived by the public as something done by powerful corporations that have the money to hire influential lobbyists, but citizen lobbying is a key part of grassroots movements.

“Showing up in person creates a relationship and an accountability that our elected officials cannot get away from,” said Nancy Falster, a farmer from Winnsboro and a member of FARFA. “The staff is much more responsive to calls, and they ask for details about what it is we are concerned about. This is where the changes will be made – face-to-face.”

FARFA’s legislative agenda includes nine local foods bills on issues ranging from property taxes and wastewater fees to regulation at farmers’ market. One of the highest profile bills is HB 46, by Representative Dan Flynn (R-Van), which would expand current legal sales of raw milk to farmers’ market and delivery options. At the bill hearing, over 100 witnesses registered in favor of HB 46, which is awaiting a vote by the House Committee on Public Health.

“Local foods bring together legislators who are on opposite sides of almost every other issue,” explained Judith McGeary, FARFA’s Executive Director and a sustainable farmer. “Local food benefits the environment, the economy, and people’s health, so both liberals and conservatives, urban and rural members, can see the benefits to their communities. Our citizen lobbying day reflects this diversity, bringing together people from all backgrounds and perspectives from across the state.” 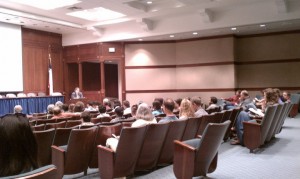