(Editor’s Note: Over the last decade, FARFA has heard dozens of testimonies on the impact raw milk has made on individuals’ health and livelihoods. This year, we have a very special volunteer intern working for us at FARFA, whose family and childhood were directly impacted by our raw milk work. Bethany tells the story of why freedom to purchase raw milk matters to her.) 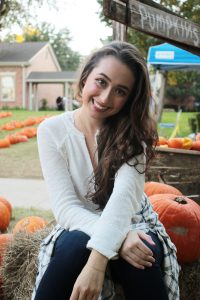 I grew up on a farm in the countryside outside of Houston. My younger sister, Maggie, suffered from extreme eczema as a child. She required a special diet, one that included raw milk, to prevent chronic inflammation of her skin.

My family had access to farm-fresh foods and raw milk because of our farm life; but in 2014, our father was diagnosed with brain cancer. My family sold the farm and moved to the city, where raw milk was out of reach. I saw what happens when raw milk isn’t accessible to people, and this experience brought me to FARFA for the 2019 Texas legislative session to help the raw milk bill pass. I’m sharing in the hopes of helping children like my sister Maggie. This is our story.

Maggie struggled with severe eczema, an atopic inflammation of the skin, since she was just a year old. The eczema covered her body in rashes and red dry patches that itched horribly. Her arms and legs were littered with open sores, making her susceptible to MRSA, a bacterial infection. Maggie constantly took antibiotics to treat the eczema and MRSA, destroying her gut bacteria. Our family tried a myriad of medicines in hopes of a cure; still, her skin was raw and she fought the incessant urge to scratch. Maggie’s condition impacted her life twenty-four hours a day.

She suffered socially because of eczema. She had open sores on her legs and arms, and other children couldn’t understand how she suffered. The illness also set back her education, because it was difficult to focus on learning to read when all she could think about was the pain. Maggie was confined indoors in hot weather and couldn’t participate in physical activities because sweat only made her condition worse. At school, she had to spend recess in the nurse’s office. Eventually, Maggie took up knitting because it kept her hands from scratching her skin and kept her mind focused on a productive task.

Still, she kept falling further behind and our parents took her out of school in order to homeschool her. Finally, when Maggie was ten, our parents found a doctor who took a different approach. The doctor saw that she was inflamed due to allergies.

Pasteurized milk topped the list of food allergies and processed foods were out of the question. Maggie went from eating a typical diet to eating only select foods, and raw milk was both comfort food and an aid in rebuilding her digestive flora.

After just three months on her diet, her condition was significantly better. Within six months, her eczema was almost gone. That was when I first learned about the policies that limited access to the food that was essential to my sister’s health – the regulations that limit sales of raw milk to on-farm only. Working with FARFA, Maggie testified before state legislators about how raw milk had made her symptoms fade, in the hopes that kids like her who needed raw milk could also have fair access to this food. She understood the privilege she had in having easy access to raw milk; not everyone could drive an hour or more each way for a gallon of milk.

Little did we know that Maggie was about to become one of those kids without access.

Just weeks after Maggie’s testimony at the State Capitol, our father was diagnosed with a form of brain cancer called glioblastoma – the same brain cancer that struck Senator John McCain. We moved to downtown Houston shortly after the diagnosis, close to the hospital where our father was being treated. Our lives changed in an instant. The battle turned from a focus on food for Maggie, to a focus on our father’s fight with brain cancer.

Because raw milk must be purchased on the farm where it is produced, Maggie had to do without. Life was too hectic. There was little time to drive to the countryside to get raw milk. The eczema slowly came back.

On February 4th, 2015, our father passed away. Maggie was left to mourn both the loss of our father and the loss of her health. Her skin was raw, so she was once again frequently at the doctor’s office. She went back to taking steroids and back to the terrible itching. She scratched at her skin until she bled. She had spent her whole childhood battling this sickness, and help was just one small bill away! I was frustrated that Texas allowed the sale of raw milk in grocery stores as recently as the 1970’s, yet now we had to drive to the farm even though it had helped my sister and so many others.

During this legislative session, I am volunteering with FARFA because I understand the importance of food freedom. Since leaving the farm and moving to the city, I know how difficult it can be to obtain fresh, local, and seasonal food. My experience with Maggie’s illness and the loss of our father has made me think about my body and where food comes from.  I know the impact that food freedom has on health, and the importance of nutrition in maintaining a long and productive life.

I want to use my gift as a writer to serve all Texans in a way that is close to my heart. I previously participated in a FARFA lobbying day at the Texas Capitol, where I visited state representatives. I supported FARFA’s bills and spoke about raw milk’s impact on me and my sister’s life because I saw, from a young age, how a small change in the law could make a large difference in a family’s life. Now, I’m studying at the University of Texas at Austin and promoting food freedom and health for all.

Maggie still battles to keep her condition under control. She’s in college at the Savannah College of Art and Design studying Fiber Arts. She studies the art she honed while struggling with a sickness that would have been helped by the Raw Milk bill.

I look back on my childhood on the family farm, which was filled with fresh produce and locally raised meats, as well as raw milk. When I first went to college, my diet changed dramatically, and I felt the change in my body. I looked back to my roots to find the remedy for my health. The awareness of my diet has come full circle, from being a farm kid to supporting the kids who need, and the farms who provide, raw milk.  It is difficult to tell our story, but I know how important it is to see the Raw Milk Bill finally pass the Texas Legislature this session. I’m working for Maggie and the other kids in Texas who deserve access to local foods and raw milk.

Join the conversation about this blog post at https://www.facebook.com/FarmAndRanchFreedom/.