Federal agencies have a terrible habit of trying to push through bad policies under the cover of darkness … and USDA’s electronic animal ID program is a prime example. As we head into the holiday weekend, USDA has quietly published new plans to mandate electronic animal ID. 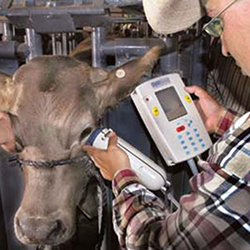 BACKGROUND: FARFA was founded to fight the National Animal Identification System (NAIS), a plan to require the owners of every single livestock and poultry animal in the country to register their property with the government, tag each animal with an internationally unique ID number (in most cases, with electronic forms of ID), and report their movements to a corporate/government shared database. This program was developed by agribusinesses, their trade associations, and technology vendors, all of whom stood to make huge profits in different ways.

These industry groups collaborated with USDA to roll out the program in 2005 under a deceptive “voluntary system.” But while it was called voluntary, the USDA was funding state agencies to reach 100% compliance, which meant that the state agencies were adopting coercive and mandatory programs to reach that goal.

FARFA took on the fight and led the national coalition that resulted in USDA withdrawing the program in 2010. But we knew that it would come back, because the agribusiness and tech companies had far too great of a monetary incentive.

In 2019, USDA tried to mandate electronic ID for cattle through an informal “fact sheet.” It announced that the agency would stop approving any non-electronic forms of identification, effectively mandating electronic forms only – and effectively amending the existing regulations without going through any of the legally required process. This blatantly illegal approach to creating a new regulation was halted last October, thanks to the combination of a lawsuit by R-CALF and an executive order from the Administration that directed agencies to halt the use of guidance documents to impose substantive requirements.

Many state regulations tie to the federal definition for “official identification,” so any change to the federal rule could have significant impacts even on cattle moving within a state.

USDA’s LATEST MOVE: USDA today announced that it is seeking public comment on a plan to approve RFID tags as the only form of “official identification” for cattle. It is still not going through the full rule-making process, in violation of the Administrative Procedures Act.

The proposal will be formally published on Monday, July 6. (The USDA has consistently published proposed rules and other changes to animal ID around holiday weekends, including Thanksgiving, Christmas, and now Independence Day … presumably because they hope that people will be distracted and not pay attention). You can read the informal text here.

The agency will accept comments through October 5.