As part of the Food Safety Modernization Act (FSMA), U.S. Congress directed the FDA to address the threat posed to our food supply by terrorists seeking to cause widespread human health harm or economic disruption.

Unfortunately, neither Congress nor the FDA acknowledge that the reason our food supply is vulnerable to such threats is because of how consolidated and centralized it has become. The best solution would be to promote locally based, decentralized food systems. 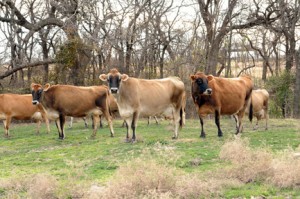 Under FSMA, the FDA is proposing new regulations to require food processors to develop and implement “food defense plans.” The good news is that the agency does recognize that terrorists would target large facilities to maximize the damage. So FDA is proposing to exclude any food processor that grosses less than $10 million annually, as well as most farms.

But the agency is proposing to include dairy farms under the new rule.

The agency has sought comments as to whether to exclude certain sizes or types of dairy farms, and what to require of others. Please join us in urging FDA to exclude small dairy farms and others that pose low risks, as well as focusing on education rather than new regulations that would burden dairy farms.

I am a [dairy farmer, farmer, consumer….]. Add a sentence or two about why you care about this issue, or your views on our food system’s vulnerability to terrorism – it’s important to personalize your comments!

The extreme consolidation of our food system is the main reason that it could be a target for terrorism or other intentional acts aimed at causing widespread human casualties. The proposed exclusion properly recognizes that small-scale food operations are simply not a terrorist target, such that it is appropriate to exclude them from these new regulatory burdens.

For dairy farms, I urge the agency to focus on the farms that pose the greatest risk. The following farms should be excluded because they are not high risk: (1) small dairy farms (fewer than 50 cows); (2) small and medium size dairy farms (fewer than 200 cows) that do not commingle their milk with other farms, but sell only direct-to-consumer or through “identity preserved” marketing channels; and (3) all goat and sheep dairy farms.

For dairy farms that would not be excluded from the proposed rule, the focus should be on education. Educating farmers on effective methods for security that are appropriate and feasible for their farms will be far more effective in the long run than requiring yet more paperwork.