The text of the Trans-Pacific Partnership has finally been released — and it’s as bad, if not worse, than expected.

When you think of “free trade,” you probably think about cargo ships, tariffs, and quotas. But only a small portion of the TPP addresses those issues. Instead, the majority of this long, complicated agreement sets the rules for all the countries in it – including the U.S. – on issues such as agriculture, food, intellectual property and patents, banking, and more. The agreement gives international corporations the ability to trump properly enacted domestic laws by attacking them as supposed trade barriers. 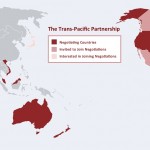 We’ll provide more information on the details of the TPP in the coming weeks. But don’t wait – you need to take action now! The Administration and Congressional leadership have already launched a PR blitz to try to win approval of the TPP, and we need to keep up the pressure on Congress to stand up for American farmers, workers, and consumers. Contact your member of Congress and tell them to reject the TPP!

The text of the TPP is available here

A true free trade agreement would remove trade barriers such as tariffs and quotas — and it would stop there. But this agreement goes far beyond free trade and will undermine our domestic laws.

Proponents of TPP claim that exports will help our economy, including our farmers. But these are the same claims that were made during the debates for NAFTA, CAFTA, and the U.S.-Korean Free Trade – and they have been proven false. Instead, a few large companies benefit, while working class Americans have paid the price. Rural communities in particular have suffered increasing rates of poverty and food insecurity.