The Texas legislative session is approaching fast! Although the Legislature won’t convene until January 2015, bills will start being filed in mid-November after the elections. The Farm and Ranch Freedom Alliance has an ambitious agenda again this year. Since bills often take more than one session to pass, we will continue to fight for important bills from the last round:

We are also working on several new bills:

We hope the “home processors’ bill” will become a model for other states as well. In 2011, the first Texas cottage food law was adopted, allowing for very limited food production and sale from individuals’ homes. In 2013, the law was expanded to its current form, which allows for people to make and sell listed nonpotentially hazardous foods at home and sell them directly to consumers at specific locations. 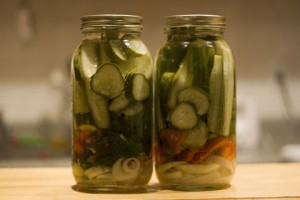 The Texas cottage food law has been a very positive development for the local food movement, with well over 1,000 new businesses estimated to have been established in the last three years. However, the limitations on what can be produced and where the food can be sold continues to limit the law’s usefulness for many farmers and food producers.

Vegetable farmers, in particular, have been unable to make much use of the cottage food law because canned and fermented vegetables are not included. Since many farmers are in rural areas without reasonable access to a commercial kitchen, the ability to make value-added products in their home kitchen would provide a significant benefit to their businesses, local economies, and local consumers.

A few states have adopted either expanded cottage food laws or separate provisions that allow for more diverse home food production. Iowa, New Hampshire, Ohio, California, and Virginia each have laws that allow home-based food businesses to produce some additional foods and/or sell wholesale (i.e. through grocery stores and other outlets) under certain conditions.

Our proposed Texas Home Processors’ Bill draws on the provisions from these other states to create a common-sense proposal that allows for the widest range of foods under reasonable conditions. In essence, the bill would create a middle tier of regulation that addresses genuine concerns about the risks of the food and the expanded distribution, while still providing realistic opportunity for home production. Stay tuned to see the bill language soon.

We’re building more momentum at the Texas Legislature with every session, thanks to a vocal consumer base that supports our farmers and strong coalition building across the political spectrum. We need to keep building with more outreach and more people taking leadership roles. If you are interested in helping this effort, please contact Judith@FarmAndRanchFreedom.org.