This week, the Senate Agriculture Committee voted to undermine states’ rights and deny you the right to know what’s in your food.  By a vote of 14-6, the Committee approved S.2609, Senator Roberts’ version of the DARK Act to prohibit mandatory state labeling of genetically engineered (GMO) foods.

The next step is the full Senate, and we have to stop this disastrous bill there! 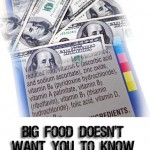 There’s talk of a “compromise,” which is likely to include a proposal for QR codes — patterned boxes on a package that you can scan with a smart phone, which then takes you to the company’s website which you have to search to find out whether or not the food has GMOs.

Your Senators need to hear from you now: Tell your Senators to oppose S. 2609, or any compromises that don’t result in mandatory, on-package physical labeling of GMOs.
There’s a reason why we call the bill that passed the House last summer the Deny Americans the Right to Know Act (DARK Act). This bill would prohibit any state from labeling GMOs and make federal labeling voluntary – which has been the law for the last 14 years and is a failed policy.

Tell your Senators that voluntary labels don’t work, and they must reject the DARK Act.

Texas, Arkansas, and Oklahoma members: there is also an opportunity next week to tell the federal agencies that they need to do a better job of regulating GMOs!  The EPA, FDA, and USDA are holding a meeting in Dallas on Wednesday, March 9.  Check out all the details below.

Call or email both of your U.S. Senators to urge them to oppose  Senator Robert’s bill or any bill that pre-empts state laws for labeling GMOs.

You can look up who your Senators are and find their contact information:

Here’s a sample script for a call:

Hi, my name is ___, and I am a constituent. I urge Senator _____ to vote against S.2609, which would block mandatory labeling of genetically engineered foods.  I urge the Senator to stand up for both states’ rights and individuals’ rights to know.

We have a right to know what is in our food so that we can make educated decisions about the food we eat. The free market can only work when consumers have the information they need to make informed choices among different products.  Without mandatory on-package labeling, consumers are effectively being defrauded.

The use of a bar code or QR code is not a valid substitute for mandatory labels. Over a third of all Americans don’t even own smartphones and could not read such codes. And many of those who own smartphones are not familiar with QR code and wouldn’t even know that the information was available.

Moreover, QR codes are extremely burdensome for consumers. With on-package labeling, you can quickly find the information you need on the package – simple, fast, and practical. Under the industry’s proposal, the shopper needs to pull out his or her smartphone (while still holding the package of food), open up an app, wait for the camera to focus on the bar code, wait for a webpage to load, and then search the website for the relevant information.
There’s no real benefit to QR codes, since food manufacturers will still have to track which products have GMO ingredients. The real reason industry is pushing for QR codes instead of physical labels is to continue to keep the majority of consumers in the dark about what they’re eating.
I urge Senator ___ to vote against S.2609 or any bill that would block state laws for mandatory physical labels on GMO foods.

A phone call is more effective than an email. If you do send an email, please replace the opening few lines with your own personalized message – personal messages have more impact than form emails.
You can also download our fact sheet on the House version of the bill at https://farmandranchfreedom.org/hr-1599-fact-sheet to send as an attachment to your email, or as a follow up to your call.

The EPA, FDA, and USDA are reviewing their “Coordinated Framework for the Regulation of Biotechnology.” The current framework has been in place since 1986, and governs how the three agencies regulate genetically engineered crops and foods. This framework has led to numerous GMO crops being approved without serious consideration of the impacts on consumers, farmworkers, and non-GMO farmers.
The agencies need to hear that we want real oversight and regulation, not rubber stamping of the GMO industry’s applications!
The agencies will hold a public meeting on the framework next Wedensday, March 9th, in Dallas, Texas. There will also be a meeting on March 30th at U.C. Davis.
The agenda is posted here.  The agencies will address the current approach to biotechnology products, through a discussion of case studies of hypothetical products.  The discussion will include the opportunity for public questions on the process.  At the end of the meeting, people will have the opportunity to provide public comments.
REGISTRATION: https://trainex.org/classdetails.cfm?courseid=1661&classid=7265
Online registration is only available until this Friday, March 4. If you plan to attend & are unable to register by Friday, email Mike Mendelsohn, mendelsohn.mike@epa.gov  to register. Pre-registration is required to be allowed to enter the EPA building.
WHERE: U.S. EPA – Region 6 offices, 1445 Ross Avenue, Dallas, TX 75202
WHEN: Wednesday, March 9, 2016, from 9:30 am to 1 pm.
PUBLIC COMMENT: Individuals should email their intention to comment, as well as their name and affiliation to mendelsohn.mike@epa.gov  prior to the meeting. Public comments made at this meeting will be submitted to the docket as part of the official meeting transcript.


WEB CAST: You can also view and participate in the meeting via a live web cast. Registration at:
https://epawebconferencing-events.acms.com/content/connect/c1/7/en/events/event/shared/100246117/event_registration.html?sco-id=100282104&_charset_=utf-8
If you plan to speak, first email Mr. Mendelsohn at the EPA to register, and then let us know by emailing Judith@FarmAndRanchFreedom.org. Since each speaker will only have a couple of minutes, we can help coordinate the points each person makes, to cover as many points as possible.
Key Issues: