You may have noticed that the labels on many foods in the grocery store include what country the food comes from. However, Country of Original Labeling (COOL) has been missing from beef and pork since 2015, since the World Trade Organization claimed that it was a “trade barrier” – and Congress caved to the international pressure, repealing mandatory COOL on pork and beef. 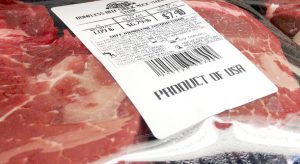 For people who buy their meat directly from local farmers, this may not seem like a big deal – after all, you know where your meat comes from, far better than any label could ever tell you!

But it’s still an important issue for everyone, farmers and consumers, conventional and holistic. Imports (grass-fed beef included) often create unfair price pressure and mislead consumers about the real costs of raising food in this country. While many American consumers are willing to pay more to support domestic food production, they simply don’t know what to buy at the stores in order to do so. And the more American ranchers get squeezed in the conventional system, the more we lose vital infrastructure that is critical to rebuilding local and regional food production.

Two good bills are currently pending in Congress to restore all or part of mandatory COOL (mCOOL). The first is S. 2716, the American Beef Labeling Act of 2021. It has a great list of bipartisan sponsors: Senators John Thune (R-SD), Jon Tester (D-MT), Mike Rounds (R-SD), Cory Booker (D-NJ), John Hoeven (R-ND), Ben Ray Luján (D-NM), Cynthia Lummis (R-WY), and Martin Heinrich (D-NM). FARFA was one of more than 400 organizations, small businesses, ranchers, and individuals from all across the United States, who sent a letter to the full Senate last week supporting S. 2716.

mCOOL is also part of a broader bill just filed by Senator Booker, S.3285, entitled “A bill to improve protections for meatpacking workers and for other purposes.” The first section, as the title sets out, focuses on protections for meatpacking workers, including reforms to prevent the USDA’s repeated grants of “line speed waivers,” which allow massive meatpacking plants to process even more animals each hour than normally allowed. These extremely fast line speeds endanger both the workers and food safety.

The second section of the bills gets into the “other purposes” – and includes not only mCOOL, but also strengthening anti-trust measures to rein in the power of the meatpacking companies. It also directs the Government Accountability Office to develop a report on the fragility of the American food system and the steps needed to build a more resilient one. S. 3285 has several co-sponsors, although not yet bipartisan: Senators Kirsten Gillibrand (D-NY), Richard Blumenthal (D-CT), Bernie Sanders (I-VT), and Elizabeth Warren (D-MA).

You can look up who your Senators are, as well as their phone numbers, at our Elected Officials Lookup.

Both bills include mandatory Country of Origin Labeling, so that consumers can choose if they want to support American ranchers by buying meat that was born, raised, and processed in our country. It’s ridiculous that we have COOL for our clothes, but not our meat!

S.3285 has several other provisions that also support building a robust domestic food system. Protecting workers in meatpacking plants not only benefits these individuals, but also serves to better protect the safety and security of our food supply. S.3285 also includes reforms to strengthen anti-trust law in the livestock and meat industry and calls for a GAO report to identify what is needed to build a more resilient food system for American farmers and consumers. This bill recognizes that we are all better off when the farmers’, workers’, and consumers’ interests are protected.

You can also send a similar message by email. You can find your Senators’ contact pages at our Elected Officials Lookup. Be sure to personalize the email – personal messages have a far greater impact than form letters!