Health departments in Texas have stepped up their attacks on the public’s right to purchase food directly from farmers, resorting to bringing the police to harass and intimidate local raw milk customers.

That’s what happened to one group of raw milk customers in Austin recently. On May 26, they went to a private home to meet the courier that they had hired to pick up their milk, and were met by four inspectors from the City of Austin Health Department and Texas Department of State Health Services (DSHS). An unmarked police car pulled into the driveway, blocking the raw milk van and a customer’s car – with her children in it – and two policemen emerged.

The inspectors proceeded to tell the customers that they could not take possession of the milk, ignoring protests that they had already paid for that milk. The inspectors also ignored the statement from the courier that he had a signed agreement with the customers making him their agent – and instead falsely wrote on the inspection report that the courier worked for the farmer.

The inspectors refused to speak to an attorney the courier called for assistance. Instead, one of the inspectors confronted the woman who had organized the group drop-off and demanded that she provide her driver’s license. When she hesitated, the inspector called a policeman over and then started to take pictures of her car with her children in it. After the woman broke down in tears, the inspector continued to question her to try to find out the names and locations of other drop points. 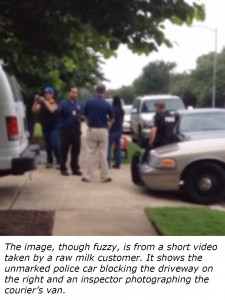 Purchased from a licensed, inspected dairy…
Milk that even the inspectors acknowledge these customers could legally purchase by driving two hours to the dairy.  In fact, in 2013, the state health department explicitly reassured a raw milk customer that she could pick up milk for multiple families and distribute it.  See the email here

But because they hired someone to do the drive for them, they had the police called on them and were prevented from taking home the food that they had paid for.

The customers had a written agreement that they each signed with the courier, designating him as their agent to act in their stead – a basic legal principle that goes back to the roots of our common law. Individuals can hire an agent to do anything that they can legally do. But apparently the health department believes that raw milk should be the exception to this basic rule of law, and that individuals should be intimidated into abandoning this option.

An inspection report was also filed on the raw milk farm, creating the threat that the farmer could be accused of violating his permit – even though he sold the milk on the farm, never left the farm, and has complied with all the regulatory requirements for selling raw milk.

A separate inspection report was filed on the courier, claiming that he has to be licensed as a retail food establishment. Yet the health departments don’t require FedEx or UPS to be licensed, even though they deliver food to people’s homes every day.

Under such an interpretation of the regulations, every person who coordinates a bulk order and then divides it up at their house for their community is breaking the law as well.

Is this the start of a broader campaign? We recently received documents indicating that, in 2013, the Ft. Worth health department reached out to other cities to discuss how to stop raw milk distribution. We’ve seen this with cottage foods before – one city health department tries a tactic to crack down on local food actions that they don’t like, and then they share the tactic with other cities who also implement it.

Please urge your elected officials to stop state and city health inspectors from interfering with farmers and consumers who are producing and purchasing legal foods by legal means!
And please help us win this fight by making a donation toward this effort. The Farm & Ranch Freedom Alliance is taking on a number of expenses related to attorneys, Public Information Act requests, and our grassroots advocacy campaign. The Farm-to-Consumer Legal Defense Fund is also providing financial assistance for the attorneys’ fees for the farmer who sold the milk. Both these organizations are non-profit groups with limited funds. Help us support the rights of farmers and their local customers by clicking on these links.

The first action item below is for Austin residents & the second one is for every Texan.

For Austin residents – Email the Austin City Council members. You can send one email to all of them at the same time by using the form at www.austintexas.gov/email/all-council-members.

SAMPLE EMAIL – It is vital to add a few sentences at the beginning so that they do not treat this as a form letter. Explain why you care about this issue: Are you a raw milk customer? Are you a local foods consumer concerned that the exact same arguments could be made against a wide range of cooperative food arrangements? Or simply an Austin resident angry at the use of police for what is, at worst, an administrative violation?

I want to express my outrage at the City of Austin Health Department’s actions in interfering with the legal purchase of raw milk products.

Texas regulations require that raw milk be purchased on the farm from a licensed dairy. Some Austin residents, rather than each drive two hours to the farm every week—  wasting time and money, creating pollution, and adding traffic to our roads—  instead hired an agent to do it for them.

I can hire an agent to pick up my groceries, sign a contract, buy any legal product, or do any other legal action for me. Nothing in any law says that raw milk is somehow different.

Yet the state and local health department not only prevented the customers from taking possession of their milk, they brought police with them, aggressively questioned one of the customers until she broke down in tears in front of her children, and attempted to find out the names of other customers —  presumably so they could do this to yet more people.

Whether you agree or disagree that raw milk is a healthy food is not the issue. Austin residents have the legal right to buy it, and the health department should not be wasting city resources in harassing people for doing so.

Please take action to prevent any such incidents in the future.

All Texans – Call or email your State Representative and State Senator. To find your State representatives, go to www.fyi.legis.state.tx.us/Address.aspx.
Phone calls have a much greater impact than emails. If you send an email, please be sure to personalize your message by adding a sentence or two at the beginning about who you are and why this issue matters to you.
SAMPLE SCRIPT FOR A CALL OR EMAIL:

My name is __, and I am a constituent. I want to urge Representative ___ (or Senator ____) to work on legislation to expand access to raw milk and to stop health departments from interfering with informed consumers’ choices about what food they buy.In a recent incident, the Texas Department of State Health Services (DSHS) and the City of Austin Health Department jointly acted to prevent customers from taking possession of raw milk that they had already paid for. The health departments even brought along police officers!

A group of raw milk customers were simply meeting at a private residence to take delivery of their orders from a courier they each had designated as their legal agent. As required by Texas state regulation, all the purchasing transactions had been made directly with the dairy farmer.

For three sessions, the Texas Legislature has considered a bill that would allow farmers to do the delivery themselves as well as sell at farmers’ markets. While the Legislature has not adopted that bill yet, the customers are not regulated businesses and they maintain their normal legal rights — which include the right to hire someone to act as their agent to do any legal activity that they themselves could do.

The customers were acting in good faith based on an email statement from DSHS in which the agency said it was legal for individuals to purchase milk at the farm on behalf of a group and bring it back to distribute to the others.

Yet the state and local health department not only prevented the customers from taking possession of their milk, they brought police with them, aggressively questioned one of the customers until she broke down in tears in front of her children, and attempted to find out the names of other customers— presumably so they could do this to yet more people.

The Texas Legislature needs to put a stop to this. I urge you to start by committing to support the bill to legalize raw milk deliveries by the farmer (which would simplify the whole situation) and allow sales at farmers markets, in line with other legal food products in this state.

In addition, I urge you to look into legislation to protect Texans who are involved in cooperative efforts to access local foods without this sort of aggressive interference by overzealous bureaucrats.

Thank you for advocating on behalf of independent farmers and their customers. Click for more information on raw milk.
June 8, 2016