Among its many impacts, the COVID-19 pandemic has revealed the fragility of our food system. In March of 2020, grocery store shelves emptied, not because of so-called panic buying, but because of the consolidated, centralized system for processing and distributing food in our country. There was no actual shortage of food, but it was 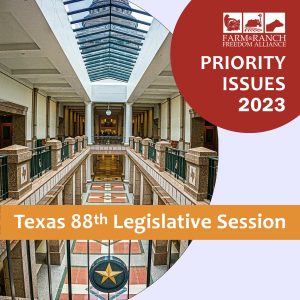 inaccessible to consumers because (1) it was in processing plants designed for large-scale packaging for industrial use and the expensive, specialized equipment couldn’t be retooled; (2) it was grown under contract with large corporations that no longer wanted it, and there were no other buyers; or (3) various other problems connected to having the vast majority of our food managed under a “just in time” system that maximizes profits for a few companies at the expense of all other interests.

Since that time, while the shelves have been partially restocked, prices have soared. Food prices are one of the major drivers of the current high inflation rates.

In contrast, small farms and food producers were very quickly able to adjust their operations and continue providing their local communities with food during this difficult time. Prices for food raised by small farmers have remained flat or with much smaller increases than in the grocery stores. Yet our local farmers, ranchers, and food producers continue to be hampered by regulations that have been written by and for large-scale, consolidated agriculture. It is time to develop a regulatory system that supports a resilient, diversified food system and small businesses.

Under the Federal Meat Inspection Act (FMIA), meat from cattle, hogs, goats, sheep, and poultry can only be sold if it is processed in a facility deemed an “inspected slaughterhouse.” Even state-inspected slaughterhouses must meet the exact same standards as USDA-inspected plants. These include having a Hazard Analysis Critical Control Point (HACCP) plan and requiring an inspector on-site at all times during the processing. The costs and regulatory barriers for inspected slaughterhouses have resulted in too few to meet the needs of many small farmers in Texas.

This situation was already a problem pre-COVID, and due to the closures and slowdowns at many large-scale meatpackers, it is now a crisis: Texas farmers in some parts of the state are unable to get a slot to process their livestock at an inspected slaughterhouse for a year or more.  They must somehow find a way to feed and care for their animals without being able to sell the meat for income, for a year or longer. Many have gone out of business.

There are approximately 100 facilities deemed “custom slaughterhouses” in Texas, which are often closer and more accessible for small farmers. These facilities must meet federal standards and are licensed and inspected by the Texas Department of State Health Services (DSHS). They do not, however, need to have an approved HACCP or have an inspector on-site during processing.

Under the FMIA, the meat from custom slaughterhouses cannot legally be sold, but can only be used for personal or household consumption by the person who owned the animal at the time of processing. As a result, they primarily process meat for hunters and homesteaders. Farmers can sell a live animal in shares to individuals, then have it processed at a custom slaughterhouse, and the meat is then distributed to the animal’s owners. But this requires that the individuals buy ½ or ¼ of a cow at a time, which can be cost-prohibitive for many consumers.

FARFA urges Texas legislators to pass a bill similar to those passed in Wyoming, Nebraska, and Colorado. These new laws allow people to purchase shares in an animal or even the entire herd in quantities far smaller than ¼ cow. This solution is consistent with the FMIA, while still allowing small farmers to more easily use custom slaughterhouses for their products. This will make selling meat more feasible and profitable for smaller-scale producers, encouraging more farmers to produce meat for their local communities. This in turn will make locally raised meat more accessible and affordable for Texans.

In addition, 41 states allow farmers to process up to 20,000 birds of their own raising on their own farms, but Texas law caps on-farm processing at half that amount. FARFA supports increasing that cap to 20,000, the amount provided for in federal law and applied in the vast majority of states.

Locally raised eggs are in high demand by restaurants and consumers, but existing regulations on “grading” create unnecessary barriers for farmers who wish to sell their eggs to chefs. “Grading” eggs involves weighing and measuring each egg, sorting them by size, obtaining a license from the Texas Department of Agriculture, and paying fees. Grading is a marketing issue and provides no benefits from a health or food safety perspective. Texas farmers can legally sell ungraded eggs directly to consumers, and you can find ungraded eggs being sold at farmers’ markets all over the state – with no reported problems. But regulations prohibit restaurants and retailers from buying ungraded eggs, preventing farmers from selling their eggs to chefs or grocers unless they get a license and grade their eggs. This requirement is a significant barrier for many small farmers, because eggs have a very small profit margin, and the additional expense and hassle is difficult for many farmers to justify.

FARFA urges the Texas Legislature to pass a bill to allow farmers to sell eggs clearly labeled as “ungraded” to restaurants, so long as they are clean and sound, with appropriate labeling so that consumers can make informed choices. Such a bill passed the Senate unanimously in 2019 (SB1805), but was not given a committee hearing in 2021 because of opposition from the large industry businesses. These are the same businesses that failed to keep eggs on the store shelves during the pandemic but that wish to keep out small businesses who could reduce their oligopolistic control over the market.

Healthy soil is a living entity, with numerous microorganisms functioning in a biological system.  Healthy soil has an immense capacity to capture and store water, which provides many important benefits: reducing runoff and flooding, reducing the need for irrigation, increasing drought resilience, increasing aquifer recharge, and improving water quality.

Despite the many benefits, only a relatively small number of Texas farmers and ranchers are currently using the full range of methods available to produce healthy soils. While many farmers have heard of rotational grazing, cover crops, no-till, and other soil health practices, they lack the information and tools to feel confident in implementing them. Many of these practices also require significant initial investment.

In 2021, the Texas Legislature passed SB 1118 in 2021, authorizing the “On the Ground Conservation” program at the Texas State Soil & Water Conservation Board. Among other things, the bill directs the agency to provide outreach, technical assistance, and grant funding to landowners who wish to use methods that produce healthy soils. TSSWCB is working to implement the program using federal grant funding and would be better able to accomplish the goals if state funding was provided.

Our dominant food production system has proven to be both fragile and subject to disruption in a crisis – as has occurred during COVID-19 – posing the threat not only of food shortages, but major price hikes. Even before COVID, there has been a growing interest for many years in raising food for one’s family, a solution with numerous benefits: accessing high-quality, fresh, nutritious food; reducing and stabilizing families’ food bills; and providing physical and mental health benefits from growing plants and caring for animals. Yet multiple cities and homeowners’ associations have outright bans on front yard gardens, backyard poultry, and bees. Just as with dogs, it is reasonable to place some restrictions on these activities to prevent nuisances – but it is not reasonable to ban them simply because they are “agricultural.”

FARFA urges the Texas Legislature to pass a bill that would ban cities and HOAs from preventing people from having front yard gardens, or up to 6 chickens or rabbits in their backyard, while specifically allowing restrictions such as banning roosters or requiring safe distances from neighbors’ residences. Such a bill passed the House with only one dissenting vote in 2021 (HB 1686), but did not make it through the Senate that session.

The current cottage food law, adopted in 2011 and expanded in 2013 and 2019, has allowed thousands of Texans to start successful home-based food businesses. The law allows people to make non-potentially hazardous foods in their home kitchens and sell them directly to consumers at specific locations, up to $50,000 annually. While Texas’ cottage food law was initially groundbreaking, it has rapidly fallen behind the options provided by other states. And producers who don’t fit within the current cottage food law face significant barriers, including the requirement for a commercial kitchen and a food manufacturer’s license.

Expanding the cottage food law to provide greater opportunities for home-based businesses, while still protecting public health, would support small businesses and provide more options for consumers. FARFA urges the Texas Legislature to remove the requirement for individuals to list their home addresses, remove the sales cap, and allow sales through certain third parties so long as the cottage foods are kept segregated with clear signage for consumers.

Under Texas law, groundwater is owned by the landowner, and Groundwater Conservation Districts (GCDs) can regulate the pumping of the water. People with small wells just for their household and livestock use are exempt from regulation – but whether there is water for them to pump depends in large part on how the GCDs regulate the big commercial pumpers. While GCDs are directed to consider multiple factors in setting their “desired future conditions” for the aquifers, one thing that is not considered is the amount of water that can be pumped sustainably over time. Nor do the districts have to consider the impacts this pumping has on the small wells people use for their household and livestock.

Two bills to address these factors both passed the House in 2021 (HB 2851 and HB 3619) but died in the Senate. FARFA urges the Legislature to pass these bills in 2023, and to take further steps to ensure that groundwater in Texas is managed so that this vital resource is available for generations to come.