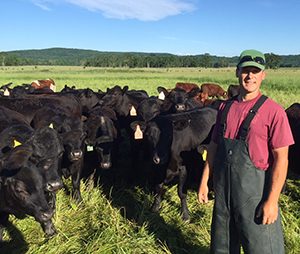 One important federal reform that would build just such an alternative route is the PRIME Act, which would allow farmers to take their animals to “custom slaughterhouses” and then sell the meat within their state, either direct to consumer or to restaurants and retailers who in turn sell direct to consumer. This means transparent, accountable meat sources to supply our local communities.

We have fought for this bill for several years and are getting closer to passing it. It has been re-introduced this year as H.R. 3835 and S.2001.

The PRIME Act is an important step to provide scale-appropriate regulations that we need for small-scale processors to diversify our food system, empowering independent farmers to feed their local communities.

Call your U.S. Representative and both of your U.S. Senators and urge them to sign on to H.R. 2825/S. 2001. You can look up who represents you at our Elected Officials Lookup page.

Below is a sample message for your call or email. Use this sample message only as a starting point – put the ideas into your own words and focus on why this is important to you. But personalized messages are the best way to convince legislators!

The COVID pandemic shone a spotlight on the problems with our consolidated meat industry. We need more small-scale farmers and independent processors, but the one-size-fits-all USDA regulations stand in the way.

The PRIME Act simply allows farmers who want to sell their meat within their own state to use these custom slaughterhouses, just as they are already used by hunters and homesteaders in their state.

This would provide immediate relief for many farmers who are facing the prospect of going out of business because they must wait one to two years to get their animals processed at an inspected plant due to the COVID crisis. And in the long-term, it creates greater opportunities for new small-scale custom slaughterhouses to open, building the infrastructure we need for a more resilient, robust food system – without spending more tax dollars.

Please support consumers and small farmers by signing on to H.R. 3835/S. 2001 as quickly as possible.

If you are a livestock producer, take a few extra minutes and ask to speak to the staffer who handles agricultural issues. Briefly explain to the staffer any problems you have faced with lack of access to inspected slaughterhouses, and how the PRIME Act would help your business and benefit your customers. And then send an email to follow up, asking them to let you know if their boss supports the bill.

Federal regulations take a one-size-fits-all approach that has favored the largest meatpackers – despite the fact that they have caused numerous foodborne illness outbreaks. Small-scale processors struggle to deal with the regulations, particularly as they are applied by USDA inspectors who are biased against small-scale operations after decades of federal policies that told producers to “get big or get out.”

As a result, small-scale livestock farmers have few places they can take their animals for processing. In some areas of the country, the nearest USDA or equivalent state facility may be several hours’ drive away or more.

There are alternatives, known as “custom slaughterhouses,” which legally operate in many states. But the meat from them can only be provided back to – and consumed by the family of – the person who owned the animal when it entered the slaughterhouse. A farmer who wants to sell his or her beef, lamb, goat, or pork to consumers at a local farmers’ market or other local outlet cannot use a custom slaughterhouse.

Custom slaughterhouses are, and will remain, subject to federal regulations, as well as state regulations. They are, and will continue to be, inspected by government agencies, although they do not have to have an inspector on-site during the actual processing (making them similar to the way most food is processed in this country).

Read our sign-on letter FARFA sent to the Senate in 2020 (note that the bill number was different).