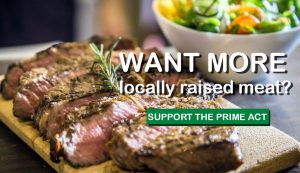 In other words, you can take your own cow to a custom slaughterhouse, or you and three other people can each share in that cow and get the meat. But if a farmer takes the cow to that exact same slaughterhouse, he can’t sell a single pound to customers on his farm or at the local farmers market.

The PRIME Act would empower states to not only set their own standards for custom slaughterhouses, as they already do, but to allow the sale within their state of custom-slaughtered beef, pork, lamb, and goat to consumers, restaurants, and grocery stores.

Passage of the PRIME Act would support small farmers, decrease stress on their animals, and improve consumer access to locally raised meats. Please help us pass this important bill!

Call or email your U.S. Representative and urge him or her to co-sponsor H.R. 2657, the PRIME Act, and to include it in the Farm Bill.

You can find out who represents you by going to www.house.gov or by calling the Capitol Switchboard at 202-224-3121. Remember, calls are far more effective, and they can take just a couple of minutes! If you send an email, be sure to add a couple of sentences at the beginning to personalize it.

As a constituent, I urge Representative ____ to co-sponsor H.R. 2657, the PRIME Act, and to work with your colleagues to have it included in the Farm Bill.

This important bill will make it easier for small farms and ranches to succeed financially and provide consumers with greater access to locally raised meats.  The bill simply removes the federal ban on the sale of meat from custom slaughterhouses directly to consumers and venues serving consumers within a state, subject to state law. This returns power to the states to establish a regulatory scheme that makes sense for their citizens.