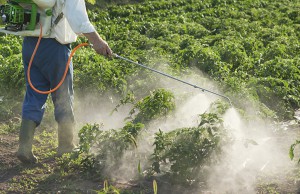 As originally filed, the bill would have blocked local control of seeds and of everything associated with cultivating plants. This would mean no ability for local communities to control the planting of GMO seeds and much more – no local control over herbicides, land applications of manure, water usage, and so much else. This would leave local farmers, landowners, and community members without any recourse from their locally elected officials.

We fought for, and got, an amendment, sponsored by State Representative Eddie Rodriguez, that limits the bill to seeds only.

It’s still a bad bill, but a significantly LESS bad bill than before. Given the power of Monsanto, DuPont, Dow, and Farm Bureau behind this bill, even this partial victory is a huge step.

Now we need to keep the Rodriguez Amendment in the bill!

There were four amendments adopted in the House, and Senator Perry, the original sponsor of the Senate bill, has refused to concur with them. So now the bill goes to a conference committee of 10 legislators who will decide which amendments to keep and which to take out, by Saturday night at midnight. Then, on Sunday, both chambers must vote to approve – and it’s almost certain that they will approve whatever the conference committee presents.

Please check the list of conference committee members below. If you live in one of the districts, please call your legislator and urge them to keep the Rodriguez Amendment in the bill!

If you’re not sure who represents you, you can look it up at http://www.fyi.legis.state.tx.us/Home.aspx

And if you’ve been following the fights with San Antonio over their water grabs, check out this alert from the League of Independent Voters about another last-minute amendment issue: http://independentleaguetx.org/torpedo-sneaky-saws-water-amendment/

If you live in one of the districts for a conference committee member, please call them today and urge them to keep the Rodriguez Amendment in SB 1172!

Senators on the Conference Committee:

Senator Perry (the sponsor of the bill): Lubbock and many counties in the panhandle, plains, and the edge of the hill country. 512-463-0128. Charles.Perry@senate.texas.gov

State Representatives on the Committee:

Message: I am calling about SB 1172, the seed bill. I urge Senator/Representative  ____ to keep the Rodriguez amendment, so that the bill is just about seeds and not everything involved in growing plants. I support local control of agriculture and our food supply.

Read our original write-up at https://farmandranchfreedom.org/protect-local-control/

The following information is contained in the fact sheet we are sending to Conference Committee members about the amendments to the bill.

Keep Rodriguez Amendment on the scope of the pre-emption

The original version of SB 1172 would have prevented cities and counties from regulating any seed “in any manner, including planting seed or cultivating plants grown from seed.”

“Cultivating” means “fostering the growth” of the plants, which would include everything people use to grow plants, whether on farms or in residential or commercial settings. Under normal principles of statutory construction, words in a bill cannot be redundant, so this broad term must mean something besides seeds or their planting.

Throughout the committee hearings, the bill sponsors insisted that the bill was intended to cover only seeds. The best way to avoid unintended consequences and lawsuits is to delete the phrase “cultivation of plants,” so that the language matches the stated intention. Representative Eddie Rodriguez’s amendment does that.

If this amendment is removed, it would create significant ambiguity in the statute on a potentially wide range of topics. Consider some the things people use to “cultivate plants”:

The simple fact that water conservation programs became a concern under this bill illustrates the potential scope of the term. “Cultivating plants” could cover many scenarios we simply haven’t thought of yet. Taking the phrase out, as the Rodriguez Amendment did, will prevent uncertainty and potential lawsuits over the scope of the law.

We urge the conference committee to keep Geren Amendment #2, which ensures that the pre-emption of regulation of seeds does not stop local governments from addressing the water conservation and drought measures that are so vital to everyone in Texas.

Delete or Limit Geren Amendment #1, which places an unfair burden on local governments

We urge the conference committee to either remove Geren Amendment #1 from the second reading completely, or limit it by deleting subsection (c). This amendment moves into uncharted waters, setting a dangerous precedent that local governments must defend their regulations under an unfair standard. (NOTE: the “second reading” refers to the vote that occurred on Sunday night. A bill is read three times on the House floor)

This amendment was referred to as a “citizen suit” provision to enforce the law. But the provisions of the new section 61.020 differ from normal citizen suit provisions in two significant ways:

On Monday, after the above three amendments were adopted, one more amendment was added. The third reading amendment limited the citizen suit provision so that it only applies to suits brought under the chapter on seeds. Without the final amendment to the bill from the 3rd reading, the citizen suit provision actually empowers any state-licensed business to sue local governments over any regulation, regardless of the topic.