Read Dr. Don Huber’s original letter to Secretary of Agriculture Tom Vilsack newly discovered organism that may have the potential to cause infertility and spontaneous abortion in farm animals, raising significant concerns about human health.

This cover letter is provided to explain the reasoning and concerns that were conveyed in a letter which I sent to Secretary of Agriculture, Thomas Vilsack on January 17, 2011 (Attachment 1). The letter was not intended for public distribution; however, the letter was ‘leaked’ and subsequently posted on the internet from which it soon became public knowledge world-wide. Once it was widely distributed, I gave permission for subsequent postings in order to keep it consistent. My busy meeting and travel schedule has delayed getting further information on this matter out publicly to the many individuals who have requested it. The scientific data on this newly recognized organism is being prepared for formal publication. 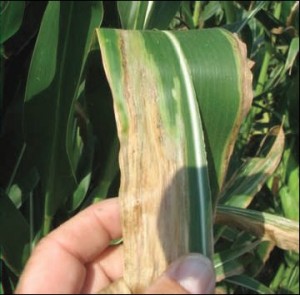 I wrote the letter to Secretary Vilsack for a very simple reason: we are experiencing a large number of problems in production agriculture in the U.S. that appear to be intensified and sometimes directly related to genetically engineered (GMO) crops, and/or the products they were engineered to tolerate – especially those related to glyphosate (the active chemical in Roundup® herbicide and generic versions of this herbicide). We have witnessed a deterioration in the plant health of corn, soybean, wheat and other crops recently with unexplained epidemics of sudden death syndrome of soybean (SDS), Goss’ wilt of corn, and take-all of small grain crops the last two years. At the same time, there has been an increasing frequency of previously unexplained animal (cattle, pig, horse, poultry) infertility and spontaneous abortions. These situations are threatening the economic viability of both crop and animal producers.

Incidence of high infertility and spontaneous abortions in the various animal species is becoming more common. Often, all previously known causes of these conditions can be ruled out as factors for these particular farm operations (Attachment 2). Detailed examination for the newly recognized organism has shown its presence in all of the cases examined to date. Koch’s postulates have been completed for animals to verify the cause/effect relationship with this newly culturable organism. A search for the source of animal infections revealed a high population of this newly discovered electron microscopic sized organism in soybean meal and corn products. The organism appears compatible, and probably synergistic, with other microorganisms such as Fusarium solani fsp. glycines, the cause of SDS of soybeans and also with gram positive bacteria. The organism also is in a very high population in Goss’ wilt infected corn caused by the gram positive bacterium Clavibacter michiganensis subsp. nebraskensis. 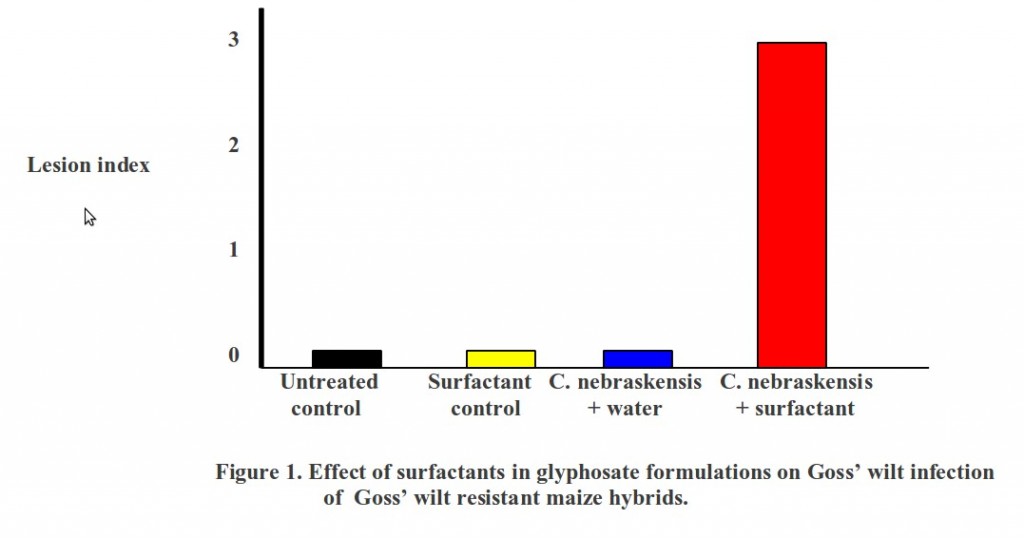 Although most corn hybrids have been genetically resistant to Goss’ wilt, preliminary research in 2010 demonstrated that the application of glyphosate herbicide or the surfactant from glyphosate formulations nullified this resistance and rendered them fully susceptible to this pathogen (Figure 1). This disease was commonly observed in many Midwestern U.S. fields planted to RR corn in 2009 and 2010, while adjacent non-GMO corn had very light to no infections in spite of the high inoculum present in no-till crop residues (Figure 2). The increased Goss’ wilt in 2010 was a major contributor to the estimated almost one billion bushels of corn ‘lost’ last year (based on USDA August estimated yields and actually harvested crop reported by USDA in January) in spite of generally good harvest conditions. 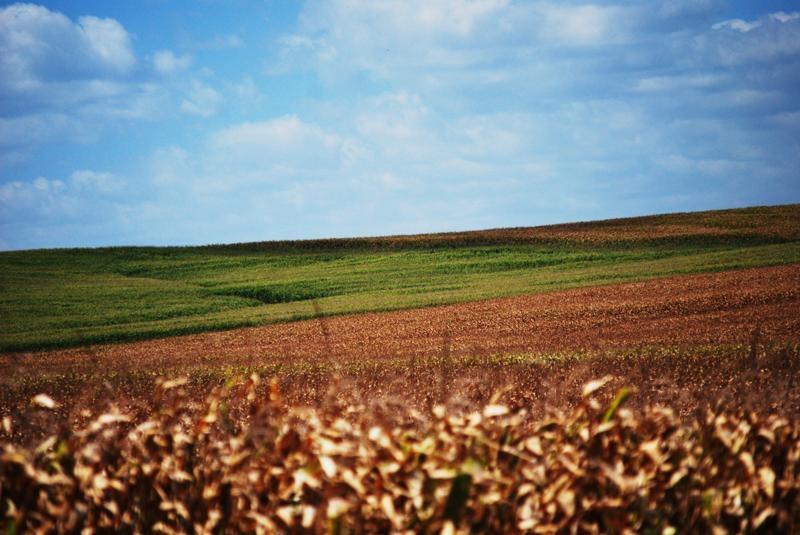 Increased severity of plant diseases after glyphosate is applied (Figure 3) is well documented and, although rarely cited, the increased disease susceptibility is the herbicidal mode of action of glyphosate (Johal and Rahe,1988, 1990; Johal and Huber, 2009; Schafer et al, 2009, 2010). The loss of disease resistance in Roundup Ready® sugar beets when glyphosate was applied prompted researchers at the USDA sugar beet laboratory to include a precautionary statement in their paper, e.g. “Precautions need to be taken when certain soil-borne diseases are present if weed management for sugar beet is to include post-emergence glyphosate treatments” (Larson et al, 2006). 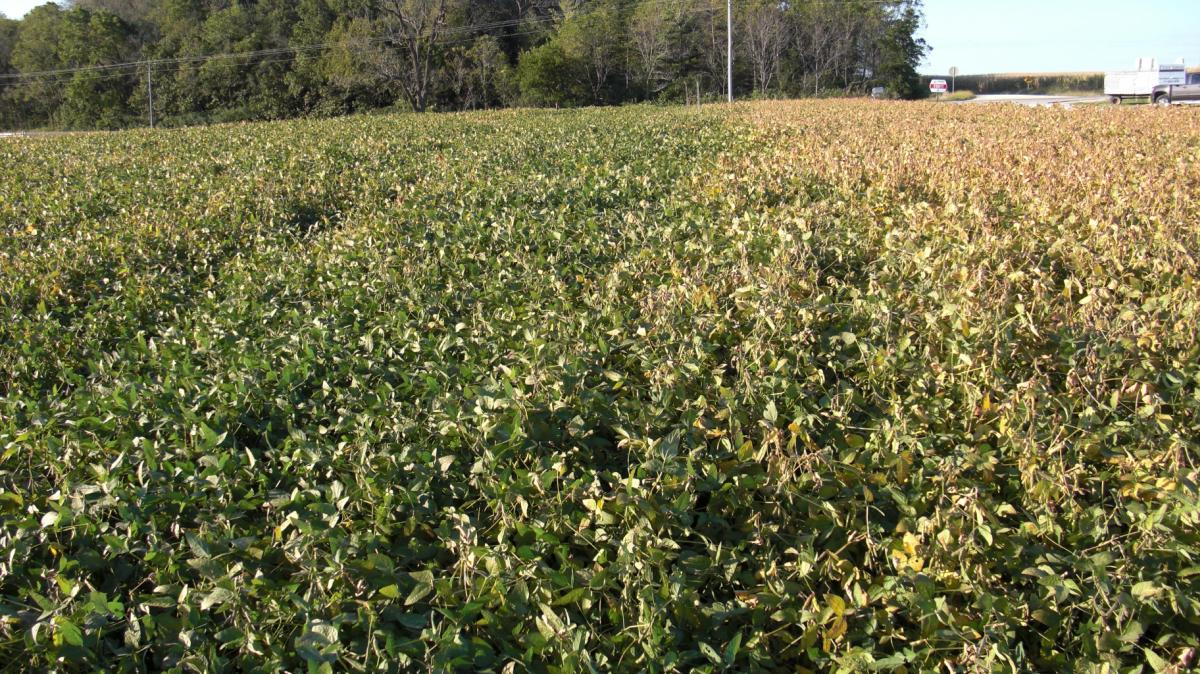 The loss of genetic resistance in Roundup Ready® corn hybrids to Goss’ wilt (Clavibacter michiganensis subsp. nebraskensis) (Figures 1 and 2), synergistic relationship of the newly recognized electron microscopic organism causing infertility and abortions in animals with gram+ bacteria, and high populations of the new EM organism in RR corn leaves and silage creates a concern for the deregulation of Roundup Ready® alfalfa which is productive in many areas only because of its genetic resistance to bacterial wilt caused by Clavibacter michiganensis subsp. insidiosum. This disease could make alfalfa unprofitable for production and, if the EM organism is associated with it in alfalfa as it is in corn, also unsafe for animal feed and their products such as milk for human consumption. The loss of alfalfa, the United State’s most valuable forage crop and fourth most economically important crop, could strike a mortal blow to struggling dairy and beef operations. The necessary research has not been done in these areas.

Deletarious effects of GM crops also are vividly demonstrated in reports from livestock producers in the U.S. Although some of these reports are anecdotal because of limited analytical techniques to verify the cause, some producers have been able to resume economical operations by changing feed sources to non-GMO crops. Replicated independent research is needed in this area, especially in light of the serious toxicological concerns raised recently that show potential human and animal toxicity from very low levels of residual glyphosate in food/feed that are many times lower than permitted in U.S. food and feed products (Seralini et al., 2011). The recent Indian Supreme Court’s independent analysis and Ruling that GMO eggplant posed a significant health risk to humans needs further evaluation in the U.S. (AgroNews, 2011).

I feel I would be totally irresponsible to ignore my own research and the vast amount of published research now available that support the concerns we are seeing in production agriculture, without bringing it to the attention of the Secretary of Agriculture with a request for him to initiate the much needed independent research. Many producers can’t wait an additional 3-10 years for someone to find the funds and neutral environment to conduct such critical research (Attachment 3).

Based on the scientific evidence currently accumulating, I do not believe it is in the best interests of the agricultural producer or consuming public for regulatory agencies to approve more GMO crops, particularly Roundup Ready® alfalfa and sugar beets, until independent research can establish their productivity when predisposed to potentially severe diseases, the irrelevance of the new EM organism, and their nutritional equivalency. In my letter, I asked the Secretary to allocate the necessary resources to do this, and requested that he exercise the utmost caution in deregulating these crops until such findings resolve the concerns expressed in the letter, if they do.

Johal, G.R. and Rahe, J.E. 1984. “Effect of soilborne paltn-pathogenic fungi on the herbicidal action of glyphosate on bean seedlings.” Phytopathology 74:950-955.

Johal, G.R. and Rahe, J.E. 1990. “Role of phytoalexins in the suppression of resistance of Phaseolus vulgaris to Colletotrichum lindemuthianum by glyphosate.” Canad. J. Plant Pathol. 12:225-235.

Attachment 2. Letter from a Veterinarian

I am working with a sow herd that has had elevated death loss for over two years and very poor reproductive performance for the last 6-8 months. I have done extensive diagnostics (primarily at Iowa State) and can find nothing infectious that is routinely found to explain the problem.

I suspect there is a toxin involved; I have done extensive testing on liver, feed, and water but can find no evidence of those compounds either. We have had a few individuals mention that the use of GMO crops could be contributing to these problems.

The producer recently saw your article to the secretary of agriculture and forwarded it to me. We are very intrigued by the organism you mention. Could you tell me if any laboratory is looking for this agent? How do we go about finding it? We are at the end of our rope and cannot figure this out. Any help you can give us would be greatly appreciated.

General Comment:
The following statement has been submitted by 26 leading corn insect scientists working at public research institutions located in 16 corn producing states. All of the scientists have been active participants of the Regional Research Project NCCC-46 “Development, Optimization, and Delivery of Management Strategies for Rootworms and Other Below-ground Insect Pests of Maize” and/or related projects with corn insect pests. The statement may be applicable to all EPA decisions on PIPs, not just for the current SAP. It should not be interpreted that the actions and opinions of these 26 scientists represent those of the entire group of scientists participating in NCCC-46. The names of the scientists have been withheld from the public docket because virtually all of us require cooperation from industry at some level to conduct our research.

Statement:
“Technology/stewardship agreements required for the purchase of genetically modified seed explicitly prohibit research. These agreements inhibit public scientists from pursuing their mandated role on behalf of the public good unless the research is approved by industry. As a result of restricted access, no truly independent research can be legally conducted on many critical questions regarding the technology, its performance, its management implications, IRM, and its interactions with insect biology. Consequently, data flowing to an EPA Scientific Advisory Panel from the public sector is unduly limited.”