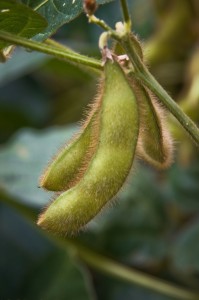 In addition to being less nutritious, the GMO soybeans also contained significant levels of glyphosate (the herbicide used on Roundup Ready crops) and Aminomethyphosphonicacid (AMPA). AMPA, the chemical compound that glyphosate breaks down to, is even more toxic than glyphosate. While the residue levels are below the EPA’s tolerance levels, they are dramatically higher than levels shown to cause severe harm to beneficial microorganisms that are needed in the digestive tracks of both livestock and humans.

The findings of this study directly contradict FDA’s 1992 claim that GMO crops are “substantially equivalent” to non-GMO crops. That crucial false finding by FDA led to the agency abandoning its responsibility to American consumers to determine whether GMO foods are safe or not.

This study also reveals that many of the studies on glyphosate-resistant, or “Roundup Ready,” GMO crops have been deeply flawed, since they have looked at the crop by itself and not as it is typically grown, with multiple applications of glyphosate.

This study further emphasizes the need for labeling of all food that contains ingredients from GMO crops and the need for FDA to re-examine its assumptions about substantial equivalence of GMO crops.

GM-soy contained high residues of glyphosate and AMPA (mean 3.3 and 5.7 mg/kg, respectively). Conventional and organic soybean batches contained none of these agrochemicals. Using 35 different nutritional and elemental variables to characterise each soy sample, we were able to discriminate GM, conventional and organic soybeans without exception, demonstrating “substantial non-equivalence” in compositional characteristics for ‘ready-to-market’ soybeans.