As an organic and non-GMO cotton farmer, I wake up each and every morning to an uneasy notion: We are surrounded and heavily outnumbered.

Roundup Ready cotton crops encircle most of our fields like a vengeful army anxious to pillage the last remaining indigenous village in the territory. But I’m not even close to running a white flag up our pole. I am a walking, talking, flesh and bone, breathing revolution. I’ll never give in to the relentless peer pressure to plant another single GMO (genetically-modified organism) seed in my life…intentionally. 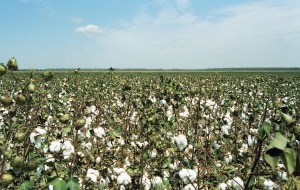 Over 100,000 acres of cotton is planted in my home county (Howard) here in Texas. More than 90 percent of that is GM (genetically-modified) cotton these days. Needless to say, we are severely outnumbered. Still, it’s not about the odds. It’s about what is right. It’s about creating more life, not vanquishing it.

Each spring, neighbors begin firing up their 100-foot, $200,000 spray rigs, pumping out gallon after gallon of Roundup, filling our environment with hundreds of millions of gallons of the nation’s highest-selling herbicide. Some spray in 20 mph+ winds, which happens almost daily here from February to July. It’s as if climbing on board one of these menacing spray rigs convinces some people the laws of physics do not apply. Not only can technology make us apathetic and arrogant, it can also make us ignorant.

Some neighbors assure me, “I’d never intentionally drift on you.” Or my personal favorite, “I’m only putting out ten pounds of pressure. It won’t drift.”

Really? Ever heard of parts per million? If I kick the dust with my boots and see it heading my way in the wind then I got news for those who missed that day of science class where the laws of inertia were discussed in full.

One neighbor sprayed in 30mph winds blowing straight toward my 250 acres of organic cotton. My plants had just reached the surface, knowing sunlight for almost 48 hours before he blasted away like a machine-gun sniper, picking off millions of baby plants in a matter of minutes. The front 50 acres looks like a bomb went off on the surface.

Often, Roundup will not kill the plants. They merely suffocate, struggling to survive until they process the poison out of their system. This often takes up to three weeks, stunting the crops. They’re unable to grow or mature during this time-frame. All of their energy goes into surviving. This impact the yield and overall vitality of the crop. The real “tattle-tales” in nature are the Roundup Ready cotton plants I find sporadically in my field. They represent one to two percent of the total population, but when a completely healthy plant stands six inches taller than the rest, you know what it is and how real the seed contamination risks are in our business.

Every field on our farm either borders or is within one mile of fields where Roundup Ready cotton is planted year after year. On a 20-mile stretch of road between my house and our farthest field, we’re the only family farm remaining that is not planting GMO crops. Here in West Texas, that means cotton. Nationwide, we plant more than 165 million acres of GMO crops. That’s roughly the size of the entire state of Texas.

Together, my dad and I farm more than 6,000 acres. None of it is genetically-modified. To date this season, we’ve had more than 300 acres damaged by Roundup drift. I’ve turned in four cases to the TDA (Texas Department of Agriculture), and they are all still pending. The crops won’t recover this season. Neither will my blood pressure.

We’re not the only farmers experiencing this. Every organic cotton farmer I know goes through this every spring. And it’s getting worse. Each season, some GMO farmers get more and more careless in the conditions in which they spray, effecting all those around them. Some non-GMO farmers are giving up and planting GM seeds rather than cause problems with neighbors or stand up in this fight. This worries me. Why are not more farmers willing to make a stand? What are we afraid of? If we don’t make the stand, who will?

Of the 12 million plus acres of cotton planted each year, more than 90 percent are GMOs. Less than 14,000 acres are organic. Farmers as a whole are an endangered species since we represent about one percent of the U.S. population, but organic and non-GMO farmers are becoming as scarce as spotting a Mexican spotted owl in the wild. And because of our extreme minority status, our willingness to stand up and fight against anyone or anything is becoming as rare as our vocational status.

If we stay silent in these times then shame on us. If we continue to take the beatings of chemical drift, GMO contamination from cross-pollination, without fighting back, then how do we expect to ever survive this invasion of our rights to farm in a healthier manner? How do we expect organic and non-GMO agriculture to survive for future generations? We need more education and awareness spread in our farming communities on herbicide drift problems, but that won’t happen if we remain silent. It won’t happen unless we are willing to stand up and fight.

It only takes one or two neighbors to create a seriously negative situation. Out of 25 potential neighbors, we only have one who calls us to let us know he is spraying. Just one. Being a “neighborly” farmer has taken on a new look in the 21st century for most. And with Monsanto’s future line of 2-4,D resistant GM seeds.

I’ve made a decision. No more neighborly discounts. I don’t care if it is my cousin, best friend, or anyone else, but any and every time I suspect Roundup drift, I’m dealing with the TDA. At least they provide free testing on tissue analysis for glyphosate (the active ingredient in Roundup.) Plus, my neighbors have to provide spraying data sheet information, as well as uncomfortable interviews and investigations from the TDA. Fines and fees may be assessed. This summer alone, more than a dozen different neighbors have had to submit spray logs and conduct interviews with a TDA agent. They can count on more of the same in the future.

Speaking with one neighbor (who farms close to 10,00 acres of GM cotton) I’ve known my entire life on the phone, he stated, “I just hate to see you make enemies.” My response was, “Making enemies is not my intention. Getting their attention is.”

I stay vigilant, monitoring every section of our fields. I’m constantly reminding our neighbors to please not spray in high winds. There is very little education and awareness when it comes to herbicide drift. Most farmers don’t believe these chemicals will drift more than 100 yards. I’ve seen them drift up to one mile. Most farmers think simply because winds are below 10mph, these chemicals won’t drift. Many biological factors come into play such as humidity, inversion, soil and moisture conditions. The real tattle tales are the GMO plants standing taller and healthier. These seeds are scattered throughout, revealing the accurate amount of damage across a field.

Most likely, I can’t tackle Monsanto in the court of law. But I will not hesitate to sue my own neighbors if this recklessness continues to damage our farming operation and abilities to grow non-GMO plants each and every season. That’s a fair fight. It is an unfortunate one. But at least it is fair. I don’t know any billionaire farmers. 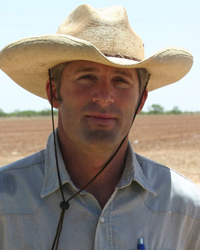 Am I popular right now in my farming community? Not at all. But at least my neighbors now know what I’m willing to do to protect our crops. Is this the end-all of my predicament? Hardly. But I am able and willing to fire back. As organic and non-GMO farmers, we’re expected to always be defensive because we’re in the minority these days. Playing offense is the only way we can expect to protect the health of our own crops and land, as well as agriculture’s future. We must be determined to stand up against the invasion of destructive chemicals even if that means standing up against our own neighbors.

Revolutions aren’t easy. This food revolution won’t be any different.

Eric Herm is a fourth-generation farmer and author of “Son of a Farmer, Child of the Earth.” His new book “Surviving Ourselves” was released this year. Visit his website at www.sonofafarmer.com for more information.