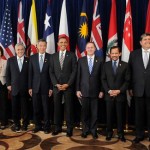 January 21, 2015:  Thanks to thousands of people who spoke up for our national sovereignty and our economy, Americans successfully stopped two damaging trade agreements from being “fast tracked” last year.  But it’s not over yet!

As President Obama made clear in his State of the Union address, he is still intent on getting authority for the  “Fast Track” approach, which prevents an open debate on the terms of trade agreements. And the Republican leadership appears to be prepared to abandon Congress’ constitutional duties  and give the President a blank check to essentially re-write our laws.

All of this is being driven by powerful corporations such as Walmart, Cargill, and Monsanto.  While the public isn’t allowed to see the draft trade agreements, these companies have been involved in the negotiation process. or international agreements that could set the rules in our country not only for tariffs — but also for food safety, “Buy Local” preferences, energy and environmental policy, financial regulations, consumer labeling and more.…