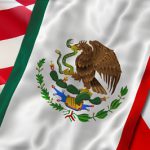 NAFTA helped corporations outsource one million middle-class American jobs and grab $390 million in taxpayer funds by attacking domestic laws before tribunals of corporate lawyers – tribunals that have power to order payment of our tax dollars to those corporations.

The terms of this massive corporate power grab are now being renegotiated, with talks happening right now in Washington, D.C.

This could finally be our chance to replace NAFTA and end its damage — but the negotiations are happening behind closed doors with 500 corporate advisors granted special access and the public locked out.

When it comes to agriculture, the big agribusinesses like to point to the increase in exports – but they completely fail to acknowledge that the increased exports have meant more money for big corporations like Tyson and Cargill, but not increased profit margins for farmers and ranchers. Farmers in all three NAFTA countries have been hurt, in the name of corporate profits.…