What happens when the government approves new herbicide-resistant GMO crops?

The use of that herbicide skyrockets.

We’ve seen it happen with Roundup-resistant crops, and now we face a tidal wave of 2,4-D spraying. The impact would be inescapable. This toxic herbicide can volatilize and travel for miles, killing and stunting non-GMO crops with no way for the farmers to protect themselves.

In addition to destroying non-GMO crops, 2,4-D has also been linked to cancer, Parkinson’s disease, endocrine disruption, and reproductive problems.

Although 2,4-D resistant crops haven’t been approved, a limited amount of 2,4-D is already being used on test plots for these GMO crops and for weed control along highways. And farmers are reporting damage from the drift. Imagine what will happen if the crops are approved and the amount of 2,4-D used massively increases! 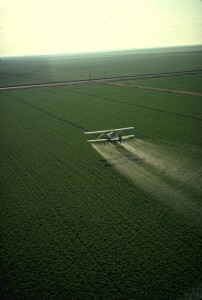 “This week, farmers are reporting 2,4-D damage in their cotton crops from Big Spring, Texas, over a hundred miles to north of Lubbock, and west another hundred miles, all the way to the New Mexico border.

2,4-D resistant crops will be far more destructive than Roundup Ready crops, with the potential to kill any and all broad leaf plants, including trees and grasses, in their area. As a conventional and organic farmer, I want to encourage everyone to please help stop the approval of 2,4-D-resistant seed from hitting the market.”

Hundreds of thousands of people have told EPA not to approve the “new use” of 2,4-D on these crops – thank you if you took the time to respond to our previous alert! Now we need Congress to weigh in!

Representatives Peter DeFazio (D-OR) and Chellie Pingree (D-ME) have written a Congressional sign-on letter urging the EPA and USDA to deny approval of 2,4-D crops and this new use of Dow’s 2,4-D herbicide. Click here to read the letter.

Please take a moment to contact your member of Congress and ask them to join Representatives DeFazio and Pingree’s letter! See Take Action options below.

EPA is timing its approval process with that of the U.S. Department of Agriculture (USDA). Both agencies appear poised to approve Dow’s 2,4-D crops and its new formulation of 2,4-D. This is a devastating blow not only to organic and non-GMO farmers, but also to consumers everywhere who seek out organic food.

Call or email your U.S. Representative to sign on to the DeFazio/Pingree letter urging the EPA and USDA to reject Dow Chemical’s “Agent Orange” crops and the toxic chemicals they rely on!

If you only have a couple of minutes, you can just leave a message with the person who answers the phone in your legislator’s office.

“My name is __________ and I am a constituent. I urge Representative __________ to sign on to Representatives DeFazio and Pingree’s letter telling the EPA and USDA to reject Dow Chemical’s genetically engineered crops and 2,4-D herbicide.”

They will probably ask you for your address, or at least a zip code, to confirm that you are a constituent.

If you have more time, ask to speak to the staffer who handles agricultural issues. Explain that you’re a constituent and that you oppose Dow’s GMO crops and toxic herbicides. Be sure to also briefly explain why you care about this issue. You can find more talking points in our sample letter below.

You can use the sample letter below for your email. Please be sure to personalize the first few sentences so that it’s not just a form message!

I urge you to sign on to a letter being circulated by Representatives Peter DeFazio and Chellie Pingree to the EPA and USDA urging them to reject 2,4-D resistant GMO cotton, corn, and soybeans and the use of toxic 2,4-D with these dangerous GMO crops.

2,4-D has been linked to cancer, Parkinson’s disease, endocrine disruption, and reproductive problems. Industry tests show that 2,4-D is contaminated with dioxins, which are often referred to as the most toxic substances known to science. In fact, EPA has reported that 2,4-D is the seventh largest source of dioxins in the U.S. More 2,4-D use will lead to more dioxins in the environment.

Dow Chemical’s genetically engineered crops represent yet another escalation in an agricultural chemical arms race that will only result in larger numbers of ever-more-toxic chemicals being dumped on our farms and communities, and into our food supply, leading to higher production costs, increased sickness, farm worker exposure and greater harm to the environment.

Please join Representatives DeFazio and Pingree in urging the EPA and USDA to reject these risky crops and the toxic 2,4-D herbicide they rely on.

Dow Chemical, the same company that brought us Napalm and Agent Orange, is now in the food business and is pushing for an unprecedented government approval: genetically engineered versions of corn, soybeans and cotton that are designed to survive repeated dousing with 2,4-D, which is half of the highly toxic chemical mixture Agent Orange.

That means more chemical usage with these crops, resulting in environmental damage and human health problems. 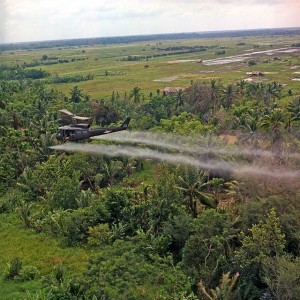 Agent Orange was the chemical defoliant used by the U.S. in Vietnam, and it caused lasting environmental damage as well as many serious medical conditions in both American veterans and the Vietnamese.

Wide scale use of Roundup with Roundup Ready GMO crops has already led to an epidemic of resistant weeds, and the next step in the chemical arms race is 2,4-D – a chemical linked to major health problems including cancer, Parkinson’s disease, endocrine disruption, and reproductive problems. Industry tests show that 2,4-D is contaminated with dioxins – often referred to as the most toxic substances known to science.

EPA’s approval would lead to a massive increase in the use of 2,4-D on our farms – and our exposure to this toxic herbicide – yet the government has completely failed to investigate the harms such increased use would cause. This is part of a growing problem, an escalating chemical arms race going on across America’s farmland.

Dow Chemical is hyping GMO 2,4-D corn, soy, and cotton as the “solution” to Roundup-resistant weeds caused by GMO Roundup Ready crops. But by driving up 2,4-D use, Dow’s crops will generate even more intractable weeds resistant to 2,4-D and other herbicides. This GMO crop system ensures a toxic spiral of ever-increasing chemical use on our land and food, which benefits no one but Dow.