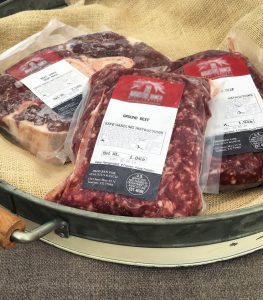 We can increase farmers’ incomes and consumer access to locally raised meat, AND reduce federal regulations and fossil fuel use – all at the same time. The PRIME Act, H.R. 2859/ S. 1620, can make that happen.

The PRIME Act repeals the federal ban on the sale of meat from what are known as “custom slaughterhouses.” These are facilities that meet state regulations, but that do not meet the federal requirements for an “inspected facility” since those standards (in addition to setting requirements for the facility and its operations) specify that an inspector be present when the animals are processed.

Custom slaughterhouses are already legally operating in numerous states, but the meat from them can only be provided back to the person who owned the animal when it entered the slaughterhouse. So a farmer who wants to sell his or her beef, lamb, goat, or pork to consumers at a local farmers’ market or other local outlet cannot use a custom slaughterhouse. Instead, the farmer has to haul animals to a USDA- or state-inspected facility.

Because of the costly requirements imposed on the inspected facilities, most of them work with the conventional, industrial-scale meat industry. There are only a relatively small number of them that will work with small farmers. In some areas of the country, the nearest inspected facility may be a several-hour drive away.

At best, the farmer has to spend many hours and a lot of gas hauling animals (and increasing the stress on the animals). And in many cases, it means that the farmers simply can’t sell their meat, unless the buyer is willing to buy a part of the LIVE animal and have them taken to the nearer custom slaughterhouse.

The PRIME Act returns control to the states to address the issue of meat processing. States would be able to permit producers to sell meat processed at a custom slaughterhouse direct to consumers or wholesale within the state. States could choose to impose whatever conditions or limitations that best suited their agricultural, food system, and social conditions.

The PRIME Act is a win-win-win in these ways:

Filed by Representative Thomas Massie (R-Kentucky), Representative Chellie Pingree (D-Maine), and Senator Angus King (I-ME), the PRIME Act already has bipartisan support with 17 co-sponsors from over a dozen states – but we need to build more support in order to move it forward.

Below is a sample message for your call or email. Remember that calls have a greater impact, and only take a couple of minutes. Use this sample message as a starting point – tailor it to your own language and focus on why this issue is important to you. Personalized messages are the best way to convince legislators!

This bill opens up more options for small farms and ranches, and thus for the consumers who want to buy from them. The bill simply removes the federal ban on the sale of meat from custom slaughterhouses directly to consumers and venues serving consumers within a state, subject to state law. This returns power to the states to establish a regulatory scheme that makes sense for their citizens.

If you are a livestock producer, take a few extra minutes and ask to speak to the staffer who handles agricultural issues.  Briefly explain to the staffer any problems you have faced with lack of access to inspected slaughterhouses, and how the PRIME Act would help your business and benefit your customers.